H has hair that seems to grow very, very fast! We have to go frequently to the barber – but I will share a few tricks we have learned – well more like… figured out along the way.

First though, let me tell you about the last time we went for a haircut. I talked to H about self-advocacy, and had him explain to the stylist that he needed the tiny strip of papery material and the towel tight around his neck – because the tiny hairs are a terrible sensory issue.

The woman wisely suggested to H, “I’ll let you put the paper tissue on – because I am not sure how tight you want it.”

H responded, “I’ll want to tie it really tight – but not so tight it kills me!”

For the first time ever – he also wanted to look through one of the hairstyle books to consider and choose his haircut. I was interested in the new development that he wanted some say in the way he looks. Ahhhh yes, 13! His choice, not surprisingly, a style reminiscent of the 80’s. (He says he looks like the T-1000 from The Terminator movies.)

H indicated that he wanted me to take him to the used-book store after the haircut, where he was interested in finding a book on magic.

He has come a very long way…

Here is the tale of our journey some of the strategies that have helped us get to this point:

When H was small we always let the stylist know that H was autistic, had sensory issues, and challenges sitting still. I figured people with sharp things close to my child needed to be armed with as much information as possible to help make the experience a safe and positive one. Also… these are important opportunities to build understanding within the community where someday my boy will be an adult.

Craig recollects that the barber shop was his first experience of telling someone in the public that his child was Autistic: “The barber was the first non-family member I had ever told about H’s autism, and it was it was a positive experience.” He said that the barber lightened up – and this helped H be more relaxed, and thus Craig was more at ease as well. He used to take H when he was really small and he would have to help hold H’s chin/head still. The sensory issue of the sound of the razor and the feel of it on his neck made him jump. Craig remembers that they would always get a brownie and chocolate milk at the bakery next door after the haircut – no matter how well the hair cut went. Craig understood that H was trying his best.

We pre-booked appointments when H was small and planned for times so that the shop was not busy, was less stimulating (read less overwhelming), and there would be little or no wait-time before the haircut.

We have had hairstylists – a number of them along the way – that have really given H careful attention and warning about what was coming. They let him touch the shaver, play with the lift on the chair, and have patiently showed and explained what was happening at each step.  They have talked endlessly with him about his interests: most often now the topic for the barber is film (horror or action) or video games.

When he was tiny – H would sit on my lap and we would both be under the Darth Vader cape. He loves deep pressure – so I could hold him close and he was often given the spray bottle of water to shoot at the mirror, and sometimes even a rather good-natured stylist.

As he got older, I would sit in a chair beside him – prompting and encouraging the socialization with the stylist. He gradually gave up the spray bottle – but he really fussed about all of the little hairs. He would have a serious sensory overload if the hairs were on him.

He would reach up and rub the hairs on his face – and that would only make it worse. It took some time to teach him to keep his hands down under the “cape” but he finally developed a trust the stylist would care for him and remove the hairs.

We actually had to bring an additional shirt so he could change  when we were done. H would slip in to the back of the shop and he would change right there. Then we would race home so he could get into the tub – to rid himself of the offending hairs of sensory doom!

We took care to develop a relationship with one particular hairstylist and H even brought her little presents at Christmas and other times too. We’d sometimes drop by when he wasn’t getting a hair cut – just so he could make the connection. The giving of items was important as it seemed to assist him with something tangible in terms of developing episodic memory and a sense of history and connectedness with this person.

Another issue that has been problematic is the sensory overload of the odors of the salon. (I dislike the smell as well – A

aaack!) We found that if we popped a tic-tac or a piece of gum into H’s mouth just before we walked through the door – that would eliminate (or lessen) the response to the smell. We overloaded his senses with a preferred smell so it blocked the others… and by the time this had worn off he didn’t notice the odor of all of the chemicals as much. (Trident Strawberry Splash is wonderful – because it is so intense and lovely to smell.)

The next step we made was for H to wear the same shirt home (without changing). When we began, H would almost burst through the door at home and race into the shower. Eventually we were able to plan a short outing to a favourite destination after the haircut – without need to rush home immediately.

Here is a picture of H wearing his Terminator sunglasses invention at the Emporium (one of our post-hair-cut destinations) You can imagine the lure of this place for my kitsch-loving retro-pop-culture buff!! It is a film, music, sci-fi and retro treasure-trove. 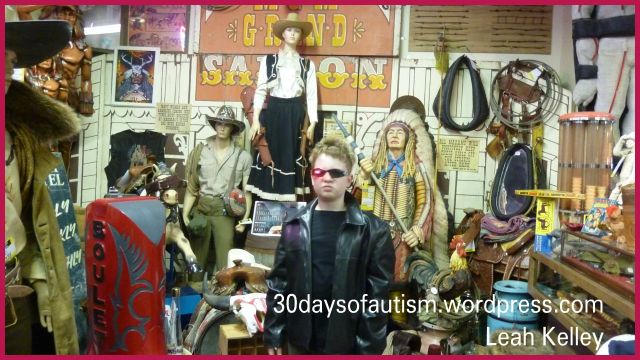 This last time H got his hair cut – just before we headed to Arizona TASH – we followed the trim with the requested visit to the bookstore – and H did procure a lovely used book about Magic.

When we got home I said, “OK buddy – into the tub with you…”

H responded, “Nah… I can wait till tonight! I’m fine mom!” and he went off to delve into his new book and pursue mastery of his latest sleight of hand trick.

Sometimes when I stop and ponder how far our child has come I can hardly believe it … and sometimes… it really feels like magic!! And though H would tell you that magicians are not supposed to reveal their secrets, I feel I must again share that years ago the OT at Children’s Hospital who evaluated H’s sensory issues suggested she had seldom seen a child with such severe sensory challenges across multiple (all) domains.  Perhaps these experiences with H are a hopeful reminder that with support and encouragement many sensory responses can become more integrated as a child grows and develops. This journey can be challenging at times… but even tiny steps can take one a very long way… and time is on our side!

6 Responses to Handling Haircuts… Autism and the Barber Shop