Camp Snarfly: Autism and Friendship on The Forest Moon of Endor

The Amazing Craig says it’s a do-over! At our house a do-over has a couple of meanings: the first would be an opportunity to try something again and make it better, as a social repair action after a misread – the other meaning is lemme try that again… I love it!

I think Craig means the ‘let’s do that again – it was great’ context. He shared how the plan to camp with H and City Mouse was sparked:

“I got the idea to take the boys camping when I was talking to City Mouse’s Dad back in March as we were discussing how unsuccessful their last year’s camp experience was.”

It is interesting to note – that even though our boys are both completely articulate – it still took almost a year for them to be able to disclose how unhappy they had been during their week away. Both families were certain that we were not willing to risk a do-over of that one!

“Fast forward to a few months later- we got back from Mexico and I got an email from City Mouse’s Dad reminding me of my comment. Circumstances allowed us to put it together quickly – and then I went up the night before, after work, to reserve a good site. I set up in the dark and then spent the next day prepping and putting up the tent – getting fire wood, bait, and having everything set up – so that when the boys got there, much of the work was done.”

This allowed Craig to focus on the boys and be ready for fun! This is  a divide and conquer strategy that Craig and I have often used when camping, as it greatly reduces the stress for all involved (and I hate prep). Craig found a site in the beautiful campground that I always imagine to be somewhere on the Ewok inhabited Forest Moon of Endor

“Now that the boys are in their teens, they were the ones that were being followed by the smaller boys. I turned around after getting some lunch supplies out of the car, and there were 8 boys in our camp – all with Nerf guns. I delayed lunch because I saw epic battles going on – problem-solving, alliances, sneak attacks, laughter, and little girls on the the outskirts like remoras on sharks, following the action of this big group of boys. I was worried and anxious myself- because I thought that arguments would break out- over which Nerf darts were whose – but all the boys had different coloured darts – like brands on cattle in the old west.

There was sharing and co-regulation and reciprocity and lots of fun. It was amazing!

The boys finally returned to our site, bathed it sweat, and inquired: “What’s for lunch?”

H and City Mouse were the bigger of the boys and were clearly the leaders. When they had had enough of the noise they now had the savvy to tactfully advocate for themselves. One little boy had a whistle and was blowing it right in City Mouse’s ear. CM said to him, “Dude, I have really sensitive hearing – would you please stop?” and the boy did.”

Apparently there were also times when our two boys were more like Foghorn Leghorn when they simply said, “Beat it kid!” However, within a short time the little boys were back at the camp inquiring “What’cha doin’?” and it all began again. 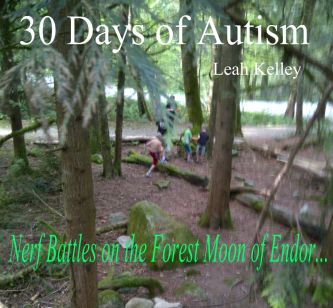 This was CM’s first time doing full metal camping, aside from the experience of last year’s summer camp. This was an opportunity to reframe the negative experience and create/replace it with a positive memory of fun and friendship.

For the first time, City Mouse lit a fire! H, a camping veteran like his dad, taught him how to use a flint to light it without matches.

City Mouse also learned how to spin-cast and caught his first fish.

And away from noise bylaws (and mothers) both boys got to shoot off bottle rockets. As loud as these were – CM loved it because he got to set one off himself and he even kept the nose cone as a souvenir. This felt a bit sweetly illicit and clandestine to both of the boys- and they took the walkie-talkies with them to report back to Craig on their count-down and launching progress. They were able to have the freedom of typical boys. (And yes… I am certain I would have put the kibosh on this – or insisted, at the very least, that Craig accompany them.)

Craig taught both boys how to pop a mosquito on their arms (something a mom would never do) which got rid of the fear and reaction to the bugs for both boys and replaced it with “Cool! You mean it will actually explode?!?”

They had the freedom to be boys… Craig took them to shoot rocks and pine cones into the lake with slingshots, and they spent endless hours making sure the campfire was stoked.

Craig reports that he created a fireside tale entitled “Revenge of the Summer Camp Bullies” which involved airhorns, kittens (one of the bullies was allergic to cats), and holographic images of horror movie villains chasing the bullies. In this way, they were given another opportunity to process their disturbing experience of last year and made it into a part of this year’s fun.

“I was the caregiver of two autistic boys for two days. That was new for me.  Upon reflection – I don’t know whether or not it is that I’ve become more skilled –  or whether it is all the work that has gone into supporting their development – or whether it is maturity – I personally think it is a combination of all of these… but this trip was a huge success!”

Apparently – it was completely snarfly (Laura Nagle’s word for the autistic-specific emotion of the joy of feeling comfortable) and it’s a do-over!

“These kind of events are things that NT people with NT kids might take for granted, but it is possible for people on the spectrum to have successful experiences like the ones that these boys have had. It is interesting for you to ask me to share about this, because at first I was kind of balking – but actually debriefing like this has been kind of good – [pause]… because I am good!! I don’t know… but it was fun!!”

Craig, you are very seldom one to go on about your skills, but you truly are The Amazing Craig… and you are also SPECTACULAR!! Thank you for being such a wonderful CIT, dad, husband, and human being – and for giving such a gift to these boys!

For a limited time you can buy an ultra-cool Snarfly t-shirt and help the Vectors of Autism project! Here is the link Yay!!

4 Responses to Camp Snarfly: Autism and Friendship on The Forest Moon of Endor