Aa is for Applecus and Autism: A look back at supporting language development 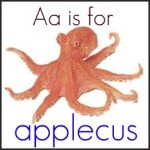 The other day I was reading about a mother’s excitement over her daughter’s language acquisition. It had me thinking back and remembering how that felt for us. My son is now 12 and has amazing expressive language – it took a long time, and we know how fortunate we are. Social language and processing are ongoing challenges, but really that is to be expected.

When H was very small he had his own words for a many things. This idiosynchratic use of language is a common characteristic for young children on the Autism spectrum. Some of his words made sense to me – as they were a collection of the sounds for that word – but just rearranged into H’s own sense or perception of how they should be ordered. Octopus was applecus, Christmas was Scramris, coffee was fuckee (yup – hard to explain that one to others). On the other hand, some of H’s words made little sense to me – but they were used consistently. To name just two: barterchoy stood for both hamburger and McDonalds, and Gru-bong was Darth Maul.

When H was two, before we understood the path we were on with our child, he was a laid back little guy and certainly not demanding. He slept an enormous amount was happy to amuse himself, so much so that other parents sometimes seemed envious. I thought this

was a sign of an independent streak – not an indication of a social disconnect. A friend of mine made an Eeyore costume for him the Hallowe’en he was two, and he was Eeyore through and through. In retrospect, I feel a more than a pang of parental guilt to admit that we sometimes referred to him as King of the one word sentence. We just assumed that he was quiet and economical with his language: why use two or three words when one will do the trick!?!

I suspect that it was as the demands for our little guy increased and the world started to speed up around him, that we began to see changes in H. He was frustrated, extremely excitable and active, would run (seemingly deliberately) into walls, trees, and tables, always had to have a stick in his hand, spun incessantly, had regular meltdowns, and transitions were near impossible. We didn’t notice these things as acutely at home, but visiting others or changing activities or beginning preschool made the communication, social, and behavioural challenges for our child very obvious indeed.

H had his first Speech and Language Assessment at the age of three. By then we knew that there were some developmental issues, and we began the intensive work with him to fill in the many gaps in his language. We learned about prompting hierarchy and that there are many intermediary interventions aside from extra time (the least intrusive intervention) to actually giving the word (the most intrusive). I remember finding it interesting that as both a teacher and a parent I knew about providing additional processing time and about providing the language through modeling. However, I had not been taught – nor had I given much consideration to the possibilities for intervention that lay between these two extremes, such as giving a part of the word, or talking about the uses of the word, or reminding H of a place or time when he encountered it, or saying “I think the word you are thinking of might rhyme with ____.” These, and other intermediary prompts actually assisted our child in developing new connections with his language and his thinking that were relevant to him and broadened his understanding. (I love fiddling with graphics- so here is a little visual I made up to illustrate what I am attempting to explain.)

Additionally, I recall that I always corrected or reinforced H with the word ‘YES‘ and then… “We say that like_____” or “Yes, you are excited about the ____.” I think starting with yes made him feel that he was understood, that we accepted and listened to what he said, and encouraged him to feel proud of his efforts.

Yes instead of No: this little one little word to preface our corrections and shaping of H’s language allowed us to model language, and he was so open to this – because he never really felt corrected – only encouraged!

I also prompted him and whispered in his ear when he needed to respond to someone or initiate communication or ask a question in a social situation. I remember how exciting it was when he started rephrasing what I said to his own words. I also remember when I pulled back from that support and he still needed it he would say, “Whisper me, Mom…”

It has me further reflecting back to a time when H was almost 6 and his approach on the playground was to growl at other kids. We would have to play with him and support his play with others and be right up there on the equipment. I sometimes felt awkward in the gaze of other parents – but mostly I tried to let that run off me and just enjoy my kid. Sometimes that is easier said than done. Sooo… I have a little self-talk mantra I say to myself in these situations… “I’m a duck, I’m a duck, I’m a duck…” And water – or the judgment of others as it may be – just runs off my back (at least theoretically – sometimes it still hurts and is upsetting).

It was when H was nearing the end of Kindergarten that I realized that the skill needed to assist him in his pragmatic use of social language, and other areas of language development was becoming more specialized. It also became apparent that the school he attended sadly did not have the resources to provide service to my child in this area. We sought out private SLP support when H was entering Gr 1 and we have been fortunate to have the services and the ongoing dedication of an amazing and highly skilled Speech and Language Pathologist.  I remember sitting through sessions with her to support H’s behaviour. Yes… it took both of us!

H would earn rubber dinosaurs on a paper labeled “Mom’s Store” and then – at the end of the session – he would trade the dinos in for candy from the treat box – like a purchase. H usually left the session with a dixie cup full of treats, and frankly, pragmatically – it worked! The added beauty of this was that because I was right there and a part of the process, I was like a sponge and picked up many tricks and techniques along the way, and our SLP always gave us things to work on in-between sessions.

This same boy – is now teaching me about the about age appropriate social introductions, as mentioned in a previous post (Language Development: Thinking about Social) Although I know that my child still has much skill to gain and much to learn, it is amazing, and heartening, to take a moment to reflect back and see how very far we have come.

6 Responses to Aa is for Applecus and Autism: A look back at supporting language development