Saturday Night at the Movies: Sharknado and B Film Mania 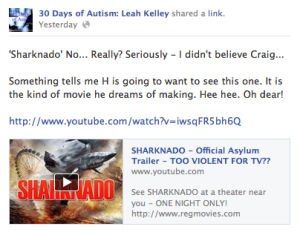 The other night I posted a trailer to facebook for a film called Sharknado.  I thought it was hilarious – but it was so outrageous that I didn’t quite believe it was a real movie. I did know, however, that H would love the premise and be wildly entertained by the concept, as he is such a huge HUGE fan of horror B films.

We showed the trailer to H yesterday morning… and of course he was completely enamored.  No surprise there.

Craig was working last night – a gig in Vancouver – so H and I had the night to ourselves. We decided to hit the movies, as we so often do. We love going to the theatre and it is a great activity for us to share.

When I was checking the listings – it was with disbelief that I realized Sharknado was actually scheduled to screen at our local theatre.

I suggested it as a possibility to H, and he was over the moon, “Seriously – we are going to see Sharknado – I thought it was a hoax or a prank – but it is a real movie?? Oh Ya!!”

He was ready to leave the house in fine form, with boundless enthusiasm, and in record time. Ahh… the power of motivation. He shared his barely contained excitement with our lovely neighbour, as we were getting in the car.

So ya, it is a real movie, and it is definitely a B movie – which of course had H waxing poetic, admiring, critiquing, breaking down and cataloging the special effects, and even naming several of the actors: “Mom – that is Robbie Rist – he is the voice actor for Michaelangelo in Teenage Mutant Ninja Turtles the live action film.” It was so much fun to see his delight and joyful excitement at the edits, effects, and plot.

So if you are also a fan of B horror movies, H and I agree that is was pretty funny and also gross. He says it was awesome and cheesy and he gives it 4 out of 5 shark heads.

I concur – but I give the night out with my boy – along with the chance to share in his interest a full 5 decapitated shark heads!

This morning H was still riding the wave of excitement. He told Craig all about the film and showed him a variety of clips, including the theme song: (The Ballad of) Sharknado.

Amidst laughter and groans at the gross scenes, I overheard them saying something about it being ‘the best worst movie ever!!’

Then H queried, “Dad, Do you want to buy Sharknado when it comes on DVD?”

And now – later today – H is working on props and effects to create an image of himself being eaten by a shark. He intends to enter this into a contest to win a walk-on role in the planned sequel.  Apparently this requires the creation of a fake cardboard severed leg with a bit of PVC pipe bone coming out the end. Ew!!

H completed his severed leg prop and did his digital magic with the photo… Pretty cool!

10 Responses to Saturday Night at the Movies: Sharknado and B Film Mania