Autism and Thoughts on Written Output: Infinity Blade II… A review by H

Please note: This post has two sections: the first is H’s review, the second consists of an examination of written output for H and others who process differently.

H is trying to teach me how to play “Infinity

Blade II” on the iPad. I love his amazing level of patience with my apparent ineptitude!

He says: “This is such a great game… I might write a review.”

I offer to scribe…

“This game is called Infinity Blade II. It is a great game about fighting evil monsters, upgrading weapons, getting cash and getting armor. Some of the weapons are really cool. Some of them are very ridiculous – like a newspaper or cardboard armor, or a ham. No… mom, quit laughing – there really is a ham – well actually it is called a ‘pork chop’.

The goal of the quest is to defeat the God-King and free The Worker. You unlock chests and while you are moving your character. You find treasure chests and bags of gold and sometimes you will find keys. The keys are very important because you need them to unlock some areas of the game and also the chests. You can get more gold coins if you sell some of the equipment that you don’t want anymore, because you have already upgraded to better ones. You can forge gems together to make them much more valuable and much more rare and powerful. You can add the gems to your weapons, armor, helmet, or magic rings… or you can sell them. What I am doing is getting as many as I can and combining them to upgrade my weapons.

Once your enemy’s life-bar is depleted you can do a ‘finishing move’ on him. This gives you bonus points and the bonus points level up your character.

Your species looks like a human mortal, or ‘mortal’, I should say, but he is really a species of creature called the ‘Deathless’. Whenever an evil creature kills you, you wake up in this room on a surgical table, and you start a new bloodline to avenge the ancestor who was killed. SO you are like the son of the one who was killed; you have all of that experience and you know what happened in your head. You are trying to avenge yourself and take out the true enemy  – The God-King – who has the ultimate weapon: The Infinity Blade. Although the God-King is the main enemy, you will encounter several enemies along the way.

When you are low on health – you might want to use some health potion – you will find some vials of blue substance while going on the quest. Make sure you pick those up.

This game has no blood – but there are several gruesome sound effects. I highly recommend this game to almost anyone who likes sci-fi games like Legend of Zelda. I got it for 2.99 on iTunes, and it is cool!”

I think it bears consideration that H was able to rattle off the language and descriptions in this review at an impressive rate. It is with much pride that I share that I could barely keep up with his steady stream of sophisticated, descriptive vocabulary and the speed of his thoughts.

This is exciting because this is a child whose language has been not been on a typical track developmentally. You can read more about our journey with language development here or in the links at the end of the post. Further, H is a kid who has huge challenges with written output – but clearly the ability to express himself is developing nicely.

As educators, parents, and others supporting those with differing neurology, we must be  conscious of what it is we are measuring when we are talking about writing and written output. Are we measuring the ability to chisel forms into a clay tablet, or handle a quill pen, or maneuver a more modern writing tool – or are we measuring the ability to express oneself with language and communicate these ideas to others? How often are the abilities of an individual marginalized because they do not process the same way – or are not able to demonstrate their understanding with the same tools – and/or because we do not question what it is we are really requiring?

Here is a sample of H’s written work from December 2010: 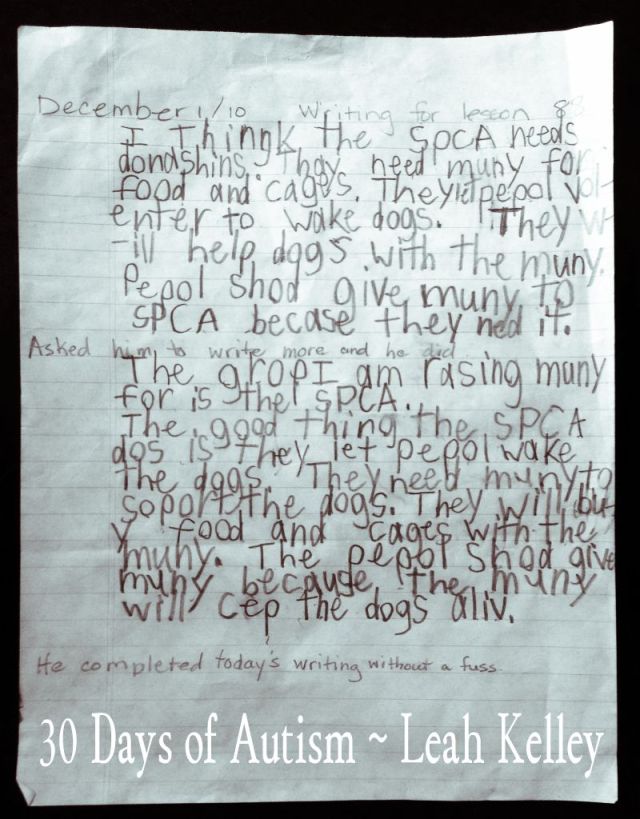 If you saw H’s written work today – I cannot imagine that you would be able to see much of a difference [except that his spelling has improved marginally]. The written output in terms of a manual skill, has not changed substantially perhaps – but his writing ability has shown considerable improvement. H’s use of language, his sentence construction, along with his ability to organize his ideas, express his perspective, and describe and explain more complex scenarios has shown notable growth. The gains in this area are obvious in his review!

These gains are far less apparent when H is expected to write his ideas with pen and paper – a situation which also layers in requirements of fine motor control, recall of letter shape, directional form, sound-symbol connection, spelling skills, the ability to organize the letters on the line, while at the same time, controlling and judging the size and the spacing between words. The effort he must put forth, when all of these of these skills are layered into the writing process, are a drain on his ability to express himself.

I do want H to have the opportunity to develop the skill to print and do cursive, and we are working to support him in developing these areas. However,  if these skills are seen as separate and discrete from his writing ability – rather than as prerequisites – they are no longer barriers, and he is able to go much, much further.

Those of us who support students or employees with written output challenges need to be open to the benefits of technology as tool. In an analogous way, consider for a moment that if I was still expected to chisel stone in order to express myself in written form – then I too would be poorly suited to be a writer.

It is easy to be stuck in an old paradigm – insisting that the words must leak out of the fingers to be considered written output. I would like to challenge that! The words that leak out of my fingers are simply representative of my thought. The fact that I have the ability to catch these with ease on paper with a pencil or upon the keyboard, is a skill that has me considered a good writer.  However, because of technology, skills that were previously seen as a prerequisite to writing can now be separated out and are becoming increasingly irrelevant to the conveyance of thought in written form.

H has an IEP and is supported in his school work with adaptations such as scribing and programs such as Kurzweil and Dragon Dictate. With supports such as these, he is developing into an amazing writer – with an expressive command of language. We fortunate to live in a time when there is technology available so that we are able to break down the skills and understand that the mastery of tools such as paper and pen no longer need to be the barriers they once were…

Aa is for Applecus and Autism: A look back at supporting language development

9 Responses to Autism and Thoughts on Written Output: Infinity Blade II… A review by H