Some may wonder why a blog that is generally about Autism would be so closely focused on matters of public education of late, but the reality is that these matters are connected, and there is an unquestionable intersectionality between social justice issues. Prejudice based on gender or sexuality, race, religion, disability, class, or the struggle for worker’s rights, or disabilities activism, or railing against racism, sexism, ableism, poverty… these all intersect when we talk about human rights.

The struggle for social justice is inherently entwined in fighting for public education, the rights of our students, and the worker’s rights of our teachers. When a system is chronically underfunded, those with the least privilege are the most vulnerable. However – there are some deeper trends and patterns here that are insidious, and disturbing, and need to be discussed.

The following is a guest post written by BC educator, Ken Bramble, B.Ed. M.A.  Ken is a N.Z. trained teacher with forty years of public school service. He came to Canada in 1966, and though he retired as an Elementary School Principal in 2001, he has remained a tireless political activist and a dedicated public education advocate. He is has graciously agreed to write this post to explain the trends and patterns he has observed, in order to connect the dots of the political/corporate agendas that have been influencing our system. Ken’s observations are of the school system in British Columbia, and is a supporter of equitable education for all B.C. students, but the implications of what he shares are frighteningly far-reaching and alarmingly applicable across a much wider global framework…

Change has always been an important part of public schooling. Changes initiated and implemented by professional educators have been the foundation for improving teaching and learning in education for as long as I have been involved.

This healthy, if sometimes painful reality, ensured my ongoing enthusiasm for the work I was doing with children. I participated in the development and provision of numerous initiatives over the years; without exception these were designed and intended to improve the service we provided to our clients, the children of B.C.

Without fanfare or ceremony, change in our school system has insidiously and quietly shifted from best practice to political interference. I have witnessed this shift as professional educators and their expertise have been systematically removed from positions of influence and leadership, to be replaced with political appointees.

It all started for me with the removal of school catchment boundaries over a decade ago. This insidious move was made in the name of “Choice.” whereby, parents would now have more choice in which school they wished for their children.

Hello Competition: Using a corporate model, the political belief was pushed that competition was good in that it brought out the best in everyone. In the production of widgets, yes… in the education of our children, no. Declining enrollment and empty classrooms prompted school administrators to attract students from outside their traditional catchment areas. When this happened, Competition then began to replace Cooperation.

Magnet Schools: In British Columbia, this shift from cooperation to competition was most effectively done with the creation of “Magnet Schools.” Offering something additional which was over and above the basic curriculum, was intended to ensure special status within the schools of choice model.

Parents began to shop for a school before buying a house.

Fine Arts, Hockey Academies and perhaps the most attractive of all, Traditional Schools were now on the à la carte menu.

Enter stage right: The Fraser Institute and FSA (Foundation Skills Assessment) province wide standardized testing to build and foster the stress of competition. Test results were published for all to see and schools for the very first time were being compared using numbers.

The concept of Magnet Schools expanded to include schools better rated by the Fraser Institute. Like all magnets these schools pulled students from schools in what were considered less desirable socio-economic areas. This was the beginning of a downhill slide in public education, where equity and universality had always been hallmarks of a healthy system. Rapidly, we witnessed the creation of ‘Have’ and ‘Have Not’ schools within the public system. In effect the result was a complex of ‘pseudo Private Schools’ within the public system. Chronic underfunding combined with this competition have subsequently placed huge amounts of pressure on our schools. Fund raising has become an essential service, further exacerbating the differences between schools.

Okay…  now let’s get to what is really going on and what is behind these changes?

We can only speculate of course and pull together the threads from various sources, but in my personal view our schools system is being subjected to a political agenda which is global in influence.

The Teachers’ Strike: Currently in British Columbia, our schools are closed pending a resolution of differences between our teachers and our government.

But… is this just a labour dispute?

I don’t think so.

Our BC Teachers are fighting for the survival of a public school system which is consistently rated in the world’s top ten. For what it’s worth, I have for your consideration a probable cause and I will lay out for you why, in my view, we are at a crucial tipping point.

After connecting the dots and undertaking considerable research I propose the following possible explanation of the actions and motivations of the government:

Get rid of the Teachers’ Union: Our current government wishes to remove any union involvement in schooling. In addition they want to privatize the system by applying an industrial model to its structure and performance. Strangling the system financially and creating chaos and confusion with this strike will provide them with the opportunity to step in and make sweeping legislative changes. They will claim that the system is broken and must be fixed. These changes will be politically motivated and based on a conservative agenda recently seen in the USA and other western countries.

Further Fragment the System: Fragmenting the system with tiers of service will come first. Private or Charter Schools will be touted as the choice for academic students with smaller classes and fewer if any special needs students. Parents will be issued vouchers (links below) to supplement the cost for their child’s education at this level.

Focus on Jobs Training: Second, schools focused on job training. These schools will follow a recently published Blueprint for Re Engineering Our School System (link below) to create jobs for the BC Resource Industry.

Instruction would be provided by three levels of instructor: 1) Teachers, with the option of leaving their union 2) Educators, with minimal training, to do job training and essential math, reading and writing and 3) Support Staff to work with our students requiring special education services. This third group would include Resource Teachers, Counselors, Specialists and EAs (Educational Assistants and Para-professionals).

Charter Schools would be managed and governed by a School Council and a Management Team contracting our clerical, custodial and maintenance services to the lowest bidders. School Boards would become redundant, replaced through the further amalgamation of our current school districts. These new Super Districts would have a Board of Directors and a CEO. Their role would be to distribute limited funding and centralize services while seeking and implementing cost saving measures.

Now let me emphasize that this scenario is speculation on my part: evidence may be hard to find but I believe that there is enough empirical evidence (links below) to support that this is the intended direction of the current government. I feel dishearteningly confident that we should anticipate significant changes in the near future which will have a dramatic and detrimental impact on the school system as we know it. These changes will all be politically motivated and have little to do with improving teaching and learning: in fact the reverse will prove to be true…

Thank you, Ken,  for connecting the dots and for sharing your thoughts, research and readings, and also your all too frightening predictions. Clearly, this is a call for collective responsibility, and along with other concerned citizens of BC, we must continue to take action to ensure the survival of our public schools…

…before it’s too late! 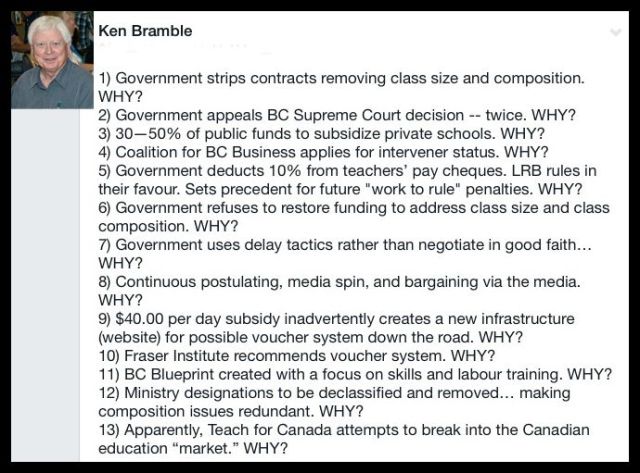 3 Responses to Ken Bramble: Connecting the Dots in #bced